Last Monday (19th Sept) he took one step and fell down.  The next day he took two steps and fell down.  Then he had a cold and a temperature.  He got better but didn’t attempt to take any more steps.  And I didn’t make a big deal out of those steps because…  Well, in my mind they didn’t count.

What happened today is a different story.  See the picture below? 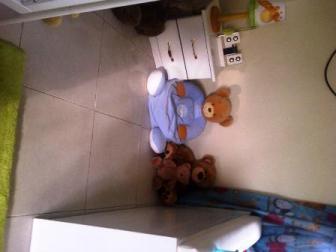 V was standing at the table playing with the iPod speakers.  He would turn the volume up, look at me, clap, dance and smile.  Then he’d turn his attention back to the speakers, play with the buttons again and repeat the clapping, dancing and smiling.  I don’t think he really knows how to work the volume buttons, because he turned it up very high.  He got a fright, jumped and then walked from the table to the edge of the sofa/bed.

In my mind, this counts 🙂

I can’t believe my baby is walking.