We reached a real milestone on September 14th. That was the day of Booni’s munan.

I wasn’t as emotional about it as I was when we had to do it for Vins. And even the barber commented on it afterwards. He said I was much stronger this time than with Vins.

Booni cried. He screamed and he cried and he howled. He wasn’t in any pain, though. I think it was mainly because he had to be kept still for about twenty minutes. This is a feat that is practically impossible for him!

I had him in my lap – my legs keeping his still and my arms around him – keeping his upper body from moving. LagosDad had to hold his head still. It sounds cruel, doesn’t it? But it had to be done.

I miss his crazy curls. And somehow his bald head makes him look like more of a little boy than a baby. But I think he looks much cuter without the hair – you can really see his face now. 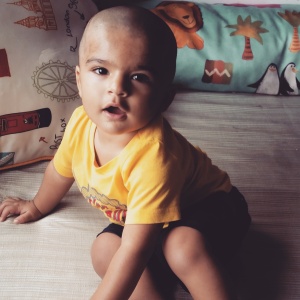