I can’t remember when I ordered them – it seems like so long ago!  They arrived ages ago – but I only just got them last week.  I just realised that makes no sense – let me explain.  The lovely people at HotPants offered to post them to me in Lagos, but I didn’t think that was a very good idea.  The postal service here used to be terrible.  Once a letter came two years after it was sent (from India).  It has recently become better – Hub got a parcel last week from the US and it only took a week.  I guess you never know.  Anyway, so I asked them to post the HotPants to my sister/parents in London and then we would figure out how to get them here (this usually involves asking very dear friends for favours (thank you GRH!))

My mum called to tell me that her cousin was coming to Lagos on the 17th of July.  I didn’t hear from her on the 18th – no problem, it was a Sunday anyway and everyone was chilling at home.  Didn’t hear from her on the 19th either.  Was beginning to get a bit worried.  Why hadn’t she called yet?  And I didn’t want to call her – because maybe she hadn’t unpacked yet or was busy.  Then on the 19th afternoon she pinged.  I forgot that I’d changed my number.  And she didn’t have the new one!  I wanted desperately to go and collect my parcel right then – but I’d heard from many people that the traffic around the Island was terrible because of David Cameron and Goodluck Jonathan’s visit.  A journey that should take 10 minutes could take up to 3 hours.  I’d waited so long already, I figured one more day wouldn’t hurt.

So now.. I have them.  I tore open the plastic and looked at them.  I think I was expecting cycling shorts material type thing…  I put them on and my heart sank.  I was going to have to LOSE WEIGHT BEFORE I COULD ZIP THEM UP!  I should have ordered a large!  Not a medium!  Have no fear – I thought to zip them up before pulling them all the way up.  *SIGH of relief*

I don’t feel hot or sweaty while I wear them and it’s only when I take them off that I realise how hot I am!

I’ve been wearing them for a week – but not noticed my clothes feeling bigger yet (but I also haven’t been exercising).  This could be because I haven’t been anywhere, and therefore not worn any thing other than my HotPants or pjs/trackies…

Will update as and when! 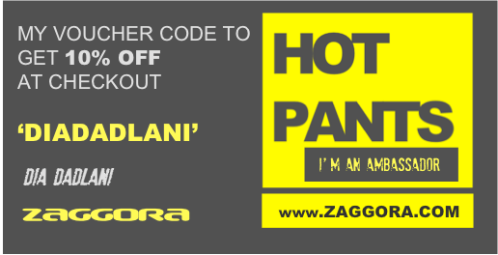 If you want to order your HotPants, use my voucher code for a 10% discount!