Last week was National Breastfeeding Awareness week.  Many ladies blogged about their breastfeeding experiences – some good, some bad – and I enjoyed reading all their posts.  It took me a while to decide on whether I wanted to share my story…  Mostly because it’s such a ‘hot’ topic.  And also, to be honest, I didn’t want to be judged.

Please know that if you breastfed your babies, or are still breastfeeding – I admire you and I will always support you.  But…

I didn’t breastfeed my baby.  There.  I said it.

I was prepared to.  I had bought nursing bras, breast pump, nursing pyjamas and tops, breastfeeding pillow, the lot.  I was scared.  I had heard so many horror stories from so many people and quite frankly, it terrified me.  I wasn’t too worried about what would happen if I couldn’t.  I’d switch to formula.  No problem.  Voicing that opened up a whole can of worms.  Hub and his brother were breastfed, so he was very keen that I nurse.  My in-laws were very keen that I breastfeed (and repeatedly said so).  My brother-in-law kept going on about how I must breastfeed.  And I started feeling a little stressed out.  It was too much pressure!  And the baby wasn’t even born yet and I was still worrying about the birth!  I wasn’t even sure if I would actually *be able* to due to a surgery I’d had ten years previously.   I was nervous, but I was definitely going to try.

When Vindoo was born, he was underweight.  He was 2.5kgs (5.8lbs).  The doctor said that he should have formula for his first two feeds before I started nursing.  They whisked him away.  And while they were stitching me up, the midwife gave Vindoo his first feed. 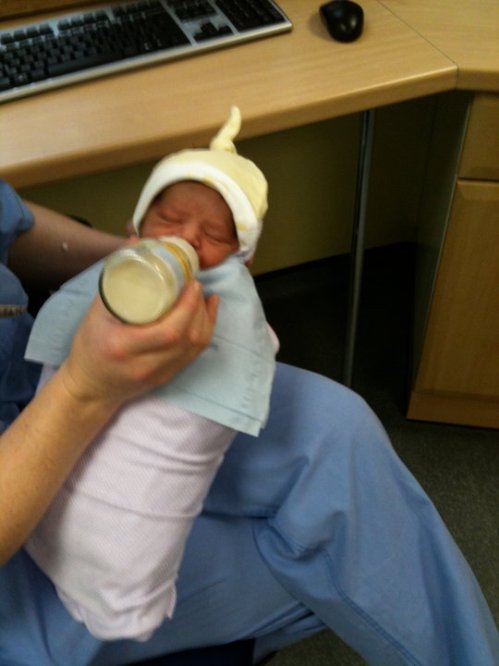 Many will think I did the wrong thing by him.  I know about all the health benefits for baby and mum.  I *know*.  But I also knew that I was doing what was best for both of us at that time.  If I didn’t *want* to do it, then neither I or my baby would be happy.

Hub was disappointed, but he stood by me (eventually).  I wasn’t breastfed and neither were my sister or brother (and we are all perfectly healthy).  Someone asked why I didn’t want to do what was best for my son.  The day after he was born.  While I was still in hospital.  I wasn’t starving him!  He was clearly happy and content!  I was doing what was best for him.  This pressure and ‘line of questioning’ continued for a day or two and then stopped.  (Thank God – I didn’t know how much more I could take).

All the midwives in the hospital were great.  No one made me feel guilty at all.  I realise how lucky I was.  I was worried about going home and having midwives and health visitors coming to our home and making me feel like a failure for not feeding.  Again, I was extremely lucky.  They were all great!  What frustrated me was that EVERY single person that came to visit asked if I was nursing.  Every single one.  And each one of them wanted to know why I had chosen not to.  Or they asked if it was because I wasn’t ‘getting any milk’.  Maybe it annoyed me because I felt a little guilty?

We came back to Lagos when Vindoo was 12 weeks old.  They are *very* big on breastfeeding here.  VERY.  I avoided taking him into school to see colleagues because I knew they would ask me if I was still nursing (which they would fully expect).  And when I did take him – when he was four months old, I was surprised only two or three people asked.  I just said, ‘no’ – rather than, ‘No.  And I never did’.  I thought I’d save myself some explaining which I knew would fall on deaf ears.  Even with just saying, ‘No’ – I got a lecture or two.

It took me a while to realise, to *really* realise and understand that choosing to breastfeed (or not) is a woman’s choice.  No one can make you do it.  Not Hub, not parents, not in-laws, no one.  They can’t force you.  And that you have to do what you have to do.  My boy and I have a strong bond.  We are close.  He is strong, happy and healthy (touch wood).  I love him more than anything in the world.  I would do anything for him.  And I didn’t have to breastfeed him to form that bond.

4 thoughts on “Breast Wasn’t Best For Me”